One of the things I care about when joining a company is their culture. It matters because as a husband and father, if things aren’t great at work, unfortunately it can spill over into my family’s life and it sucks.

I recently came across this behind the scenes look into Hongru Hou’s — a design associate — onboarding experience at Airbnb. There were a couple of points that really stuck out to me and spoke about Airbnb’s culture or at least from within the design team.

The first was this image of Hongru’s desk. 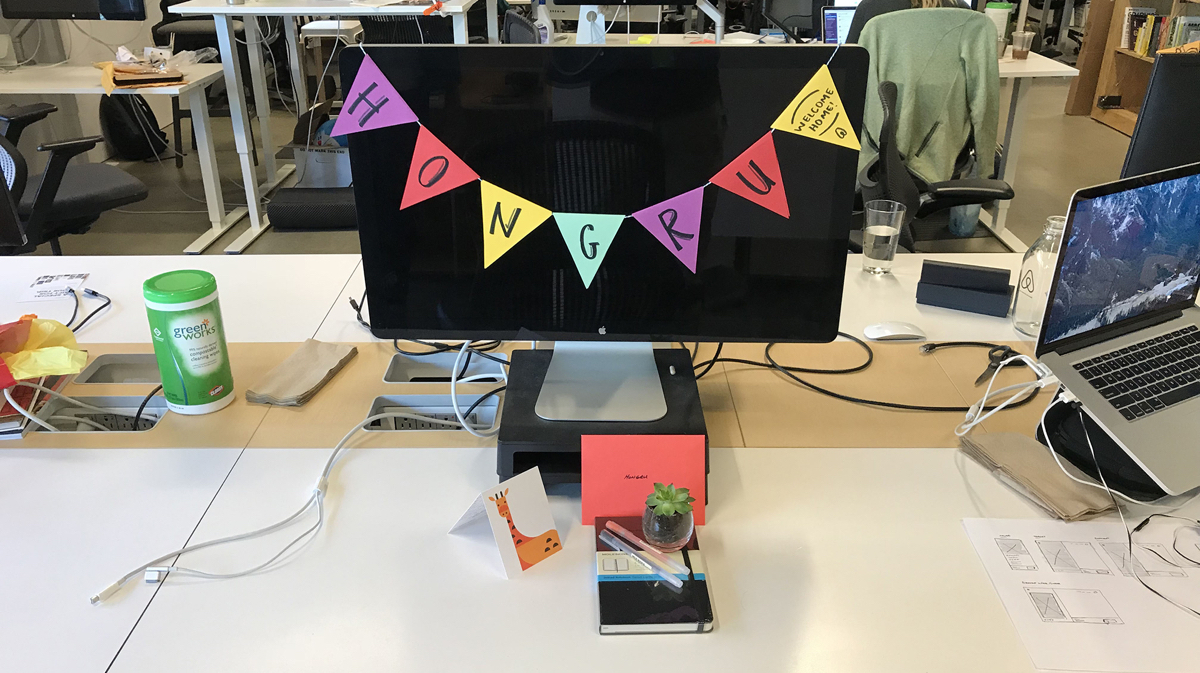 All the jobs I’ve taken in the past I’ve been welcomed by an empty desk with maybe my new work gear. While the gear definitely gets my inner nerd excited, seeing the picture of Hongru’s desk exudes a different level of warmth and welcomeness.

In the image you can see a notebook and a set of pens — tools familiar to a designer. Not only do they equip Hongru with the digital tools that he’ll need for his job but also analog tools.

While the plant isn’t needed for Hongru to do his job well, I thought it was a nice organic touch. Often being surrounded by machines and inanimate objects can be depressing. But a little plant as a desk mate livens up ones environment.

The second thing that stuck out to me about Hongru’s onboarding was the activity they had him perform to get to know people.

My welcome is still vivid to me; on my first day, I was greeted by a set of cards with people’s names on them. I was then tasked to meet the person on each card and collect their signatures. This was extremely helpful for an introverted person like myself to break the ice in a new environment.

As an introvert myself this resonated with me. Being in a new environment can be intimidating. Coupled with the memory of a hamster, it takes a lot of energy to get to know new colleagues and remember their names. Often repeatedly making an effort to speak with a person and taking mental notes and ways to remember them helps, but I thought the cards idea was nice.

I’m not sure specifically if the cards were index cards or a greeting card, but I imagine it’s a nice method to allow for someone new to a team to quickly walk away from a first encounter and give them the ability to quickly jot down a thing or two that would help them remember their colleague better in the future.

I really enjoyed reading about Hongru’s experience and definitely will take some inspiration as I and my teammates welcome others to our team and a company as a whole.

While I don’t expect an entire company to have the same experience when welcoming new hires, I imagine that little welcoming gestures can start on a micro scale within a team and hopefully influence outwards on a more macro level throughout the company.