This post was made back in 2005, when I was 21 (I cannot believe this was almost a decade ago). To give some context, back in 2004 I moved out to California with one of my childhood friends, Christopher Lim. One of the reasons for moving out to California was to pursue a career in computer animation.

The Incredibles is one of my favorite movies of all time so having the chance to meet Brad Bird was a big deal. I didn’t finish the computer animation program, but the things that I learned have definitely influenced the way I create as a programmer today.

Here is the entry, enjoy!

So today I was in my color and design class. Charles calls me up and I figure it’s nothing urgent and just let the voice mail pick up. Seconds later Chris calls. I pick up. Chris asks, “What are you doing?” I tell him that I am in class and then the next words that came out of his mouth will change my life forever.

He asks, “Dude when do you get out of class?” I ask why and he says, “Mike we gotta get our butts over to the Virgin store. Brad Bird is there!” Without a second to think I told Chris that I was on my way.

I run back into class to pack up my stuff, people are looking at me with blank stares. I tell them, can’t talk, Brad Bird, Virgin Records, director of The Incredibles. And then I run out of the class without looking back.

I make my way to the apt. I grabbed my, Art of The Incredibles Book and my Iron Giant DVD. We run out the door. A million questions are running through my mind. So many questions to ask. So much to talk about.

Chris and I talk about how we were actually even talking about Brad Bird the night before. So we get to the store. There’s a really long line. Chris buys a DVD of The Incredibles and we wait. We wait, we wait and we wait.

I thought it was clever and I took out my Iron Giant Sleeve and stuck it inside my Art Of Incredibles book. Finally we’re about 5 minutes away from Brad and the announcer starts announcing that they will give out prizes if you knew the answers to the questions.

Finally we got up to Brad. I put my book down and he opens it. He gives a big smile and says, “Oh The Iron Giant!” He grabs a different color marker and signs my sleeve. Then he signs my book and carefully signs my shirt that I had just won. All while answering the questions that I had been rehearsing with Chris while waiting in line.

Those questions were…What motivates you to make such awesome movies? and Are you going to be at Pixar this weekend for the Siggraph judging? He answers I like to make movies that I, myself would watch. And he also says that he will be taking a break for now and won’t be at Pixar.

Then I turn to the guy with camera with Brad’s hand in my hand. I give a huge smile and stand there patiently. The camera doesn’t go off. I laugh aloud thinking great it’s not working. I feel Brad’s hand start to slip away, but I held on. The flash finally goes off. And I let off a sigh of relief.

Before I left, Brad comments, “That was the longest fake pose ever”. I laugh with him and we parted our ways.

All in all this has been a great day for me. In my lifetime I already got to meet one of the greatest animation directors around. He’s one of the reasons why I’m in animation myself. I have to admit, there must be a meaning to all this… Below are the pictures taken with Brad and of my signed memorialbilias. 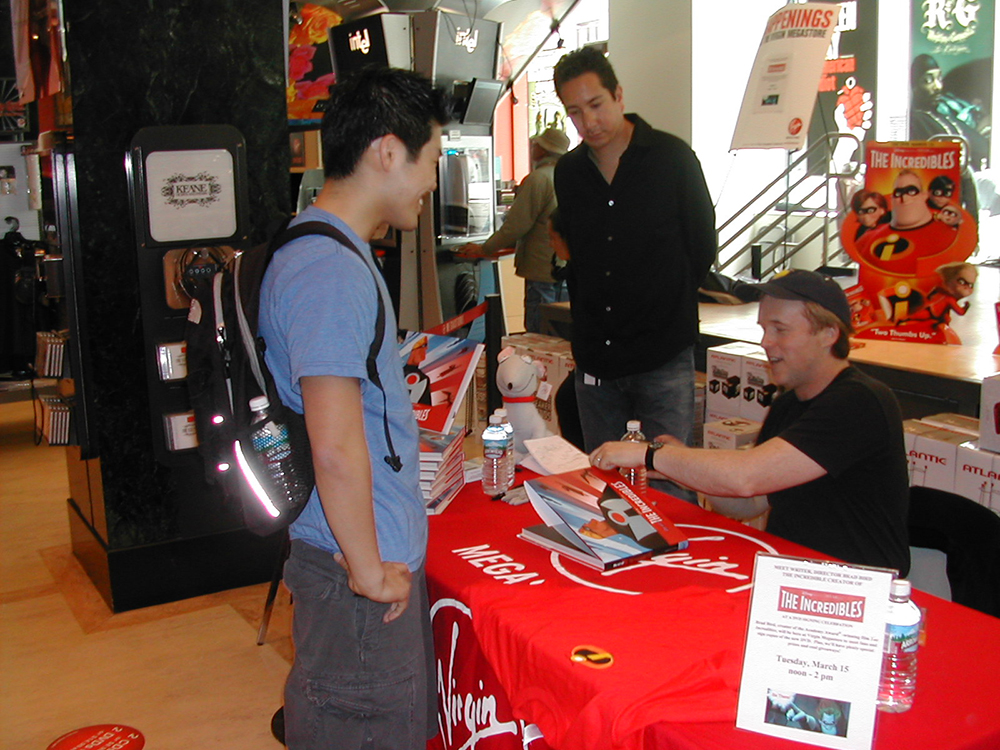 Brad thinks he’s signing an art book, but he soon finds a DVD sleeve for The Iron Giant in there. 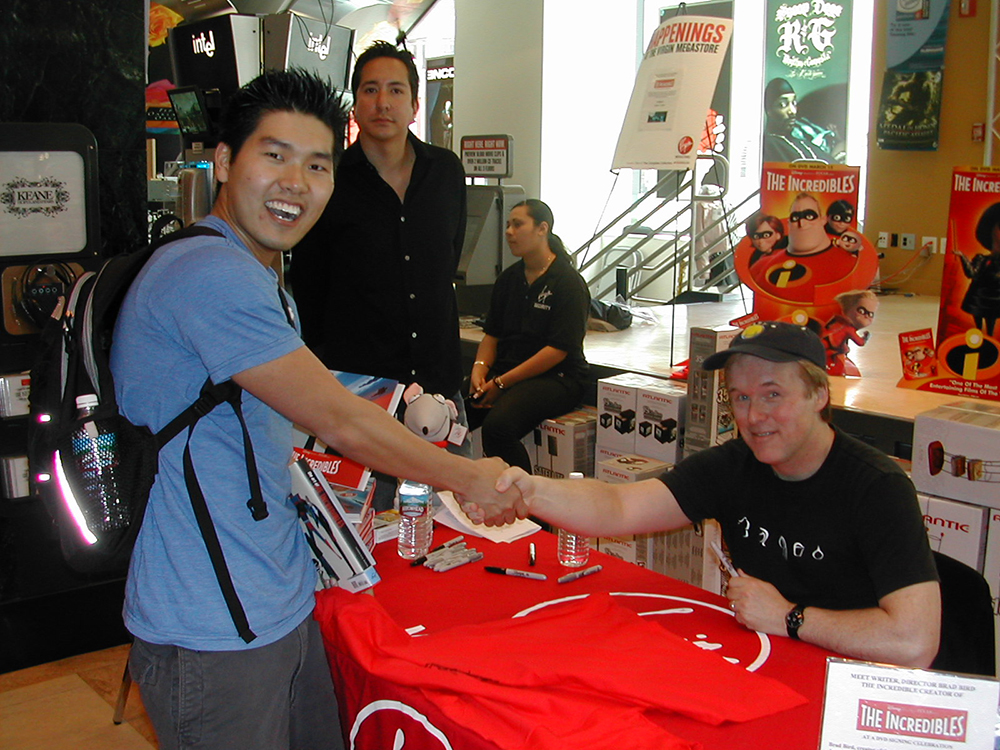 Check out that ginormous pimple on my chin. This was the longest fake pose ever. And look at that dude in the back totally photobombing. 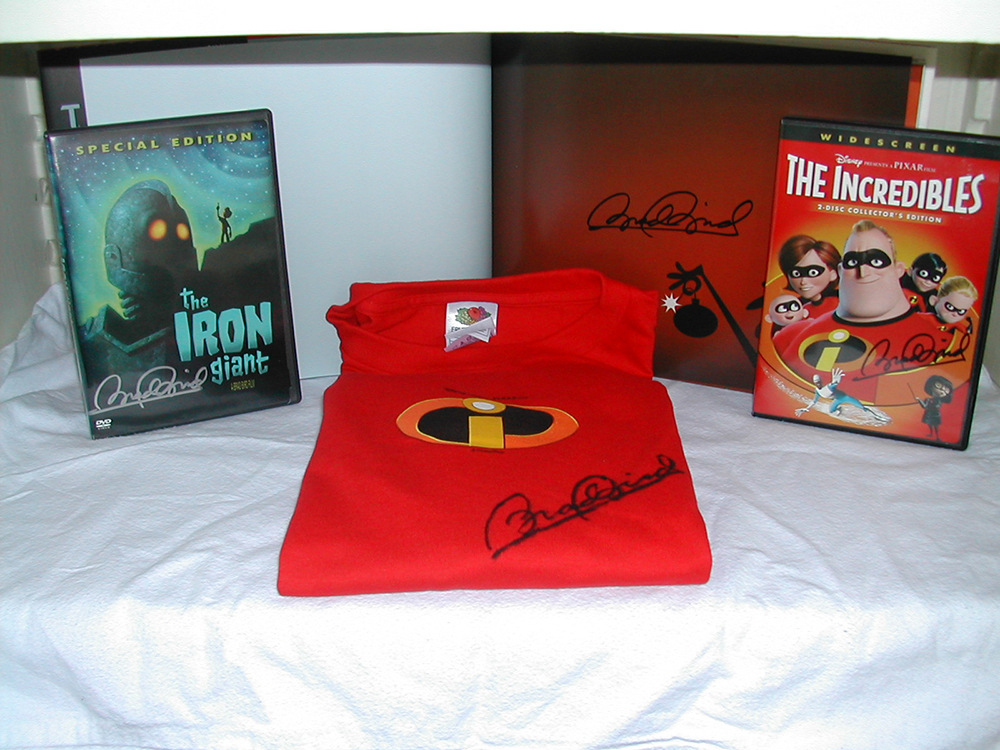 The treasure of Brad Bird autographed stuff. Unfortunately I don’t have any of these anymore. I sold them on eBay to fund my wedding back in 2011.

Hope you enjoyed this piece of personal history. I cringed at this article a few times because the 21 year old me was such a dork. Although some may say not much has changed.