On October 14, 2015 CodeHive passed the one year mark since it went live. Originally this post was pretty epic in that it was nearing 2400+ words and it was to include some observations and reflections on the past year but I’ve decided to break it into two parts. Part one, which is this post, is all about numbers from the first year. Part two, I wanted to give a little more thought and reflection on before publishing it. So you’ll have to tune in next week to read part two. But while you’re here, enjoy part one with some numbers and charts.

At the time of writing, CodeHive has 419 users that have signed up. “Signed up” means, that a user with a GitHub account have authenticated via GitHub to sign into CodeHive. We chose GitHub for our signup/signin mechanism because GitHub has become a standard for how developers work on code together. Christopher and I use it to build CodeHive from opposite sides of the U.S. as well as our other products.

If you look at the chart above, the first month alone brought in 72% of our user sign ups. This was due to a spike we experienced when our site was posted on Reddit and Hackernews. After that it took us another 11 months to reach our next hundred user sign ups. Community building ain’t easy.

To the 419 users who have signed up, I sincerely want to thank each and everyone of you for caring enough to sign up and join our community. Virtual high-fives.

I’d say we’re at around 3.5. Ha! I laugh because, if you visit CodeHive you’ll most likely see a bunch of posts (what we call Boards on CodeHive) by me. I consider active users, folks who actually post a question or a tip to CodeHive or leaves feedback on a Board.

I account for 1 active user out of the 3.5. There’s Zeke that is another and my partner, Christopher the third. Which leaves 0.5 active users. I just clump together all the users who have created no more than 2 Boards or feedback on CodeHive as this half active user.

Top 10 most popular Boards based on views

Again these numbers aren’t anything to boast about since there are a lot of other web properties that blow it out of the water. But they are big numbers compared to any other web property that I have personally built/worked on outside of my j-o-b-s. I’m far from anything close to an analytics guru, I’m just sharing the numbers because numbers and charts are pretty dope.

This is a chart that I grabbed off of our Google Analytics. It is the number of sessions we’ve seen in the past year. According to Google, a session is:

A session is a group of interactions that take place on your website within a given time frame. For example a single session can contain multiple screen or page views, events, social interactions, and ecommerce transactions 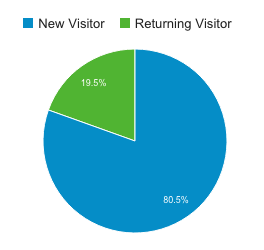 % of returning vs new sessions

The spike on the very left hand side of the chart is from the week of our launch. Without really knowing the force that is Reddit, I posted CodeHive on /r/webdev/ and we saw a ton of visitors and user sign ups as we sat on the front page of webdev. Then someone posted on Hackernews later that same week and we saw another wave of visitors. In total sessions we saw 3,278 in just 2 weeks in October 2014.

It is pretty cool to see that today, we’ve surpassed the number of monthly sessions we saw during that initial launch spike. Most of that is thanks to tweeting, Google ranking us for keywords and simply being a citizen on the Interwebs.

Top 5 countries where sessions originate from:

Glad we took the time to make the site responsive on launch day. Mobile accounts for almost 8% of total traffic. I imagine that number to only go up over time.

At the time of writing, we’ve got 109 folks who are following along on Twitter. To the 109 followers, seriously thanks!

Collectively, Christopher and I have made 701 commits to the Git repo holding CodeHive’s code base.

There are 17,910 lines of code that make up CodeHive. This number was grabbed using this command git ls-files | xargs cat | wc -l. Since CodeHive is built on Rails, I quickly created a new Rails app and ran the same command and got 979. This is so I can get to a rough estimate of actual lines we have written versus how many lines Rails generates. So subtracting the two numbers we get, 16,931 lines of code that Christopher and I have personally written ourselves. Whoa.

Conclusion to part one

First, thanks for reading part one about CodeHive’s first year. You’ve read over 1300 words to get to this spot. Ok, enough with the numbers. But yeah thanks for taking the time to read the whole post through. It means a lot that you’ve taken time out of your day to do so.

Second, part two is coming. I’ve wanted to give some better reflection before I published it. So if you’re interested in reading about what I’ve learned and observed in the past year of running CodeHive, follow along on Twitter or sign up via email to find out when I’ve published it.

Lastly, only YOU can prevent forest fires. Until next time folks. Cheers.