Growing up as a Korean-American kid, I didn’t quite understand the importance of culture. I spoke Korean, ate Korean food at home and listened to Korean music at various times in my life. But there was always a struggle to fully appreciate my culture as a Korean person.

In high school, when hanging out with other Korean kids, I would identify myself as an American.

While I appreciated and took part in the Korean culture throughout my life, I often found myself distant.

It wasn’t until I got married and had kids did I start to see the beauty of heritage and the joy of passing on what little part of the Korean culture I embraced and understood.

My wife was born and raised in Germany. Which means she grew up as a Korean-German. While I find the German side of her life’s story fascinating, it was the Korean side where we found commonality when we were dating.

While we grew up in different cultures and had different second-languages — her’s was German, mine was English — we enjoyed the familiarity of eating meals we grew up with together, speaking bits of Korean and shared stories of growing up in immigrant families.

A card for my mother-in-law

When my son was born, my mother-in-law visited us. She stayed with us through Valentine’s Day that same year. My Korean is very limited but I wanted to get her a gift that would speak of the gratitude I had for her coming to help us as new parents. I searched local stores that sold greeting cards and could not find anything in Korean or German — languages which she spoke. Searching online I found a few but they either looked dated or didn’t appeal to me.

I ended up buying my mother-in-law flowers for Valentine’s Day and that same year my wife and I started a paper goods business called, Native Haus. We started Native Haus to create paper goods that we wanted to buy and use to express love and gratitude natively to our loved ones.

We started with cards, then added t-shirts and created banners for various life occasions that are celebrated in the Korean culture.

Over the years we got to hear stories of how these products were able to allow families from all over the world to express love and celebrate culture with their loved ones.

After our family’s trip to Korea in the winter of 2017, I was surprised to see that spending even just two weeks in Korea — immersed in the culture — my kids were able to pick up a lot of the Korean language. While I don’t expect my kids to speak, read or write fluently in Korean, I want to encourage their natural curiosity and ability to pick up on the language.

It was from this trip, that I had the idea to create a set of flash cards of various foods that would have their Korean names, phonetic English spelling and their English names so that my kids would have a fun way to learn Korean.

I’m no illustrator but I managed to create 16 cute and whimsical food characters for the flash card set. That same year my third child was born and as they say, life happened and I had forgotten about my cards idea.

Then one day in the fall of 2019, while I was speaking to a friend about utilizing by-products of the things they created, I had remembered my illustrations for the card set. While the physical card set felt like a lot of work to actualize, the effort to organize them and post them on Instagram didn’t seem like a lot of work.

So I took each character in the set, squished them into a square format and decided to post an illustration each day until I ran out.

The first week, it was just friends and the occasional stranger that found my illustrations from the hash tags I was experimenting with.

Then, I posted my illustration of a potato and it kind of blew up. 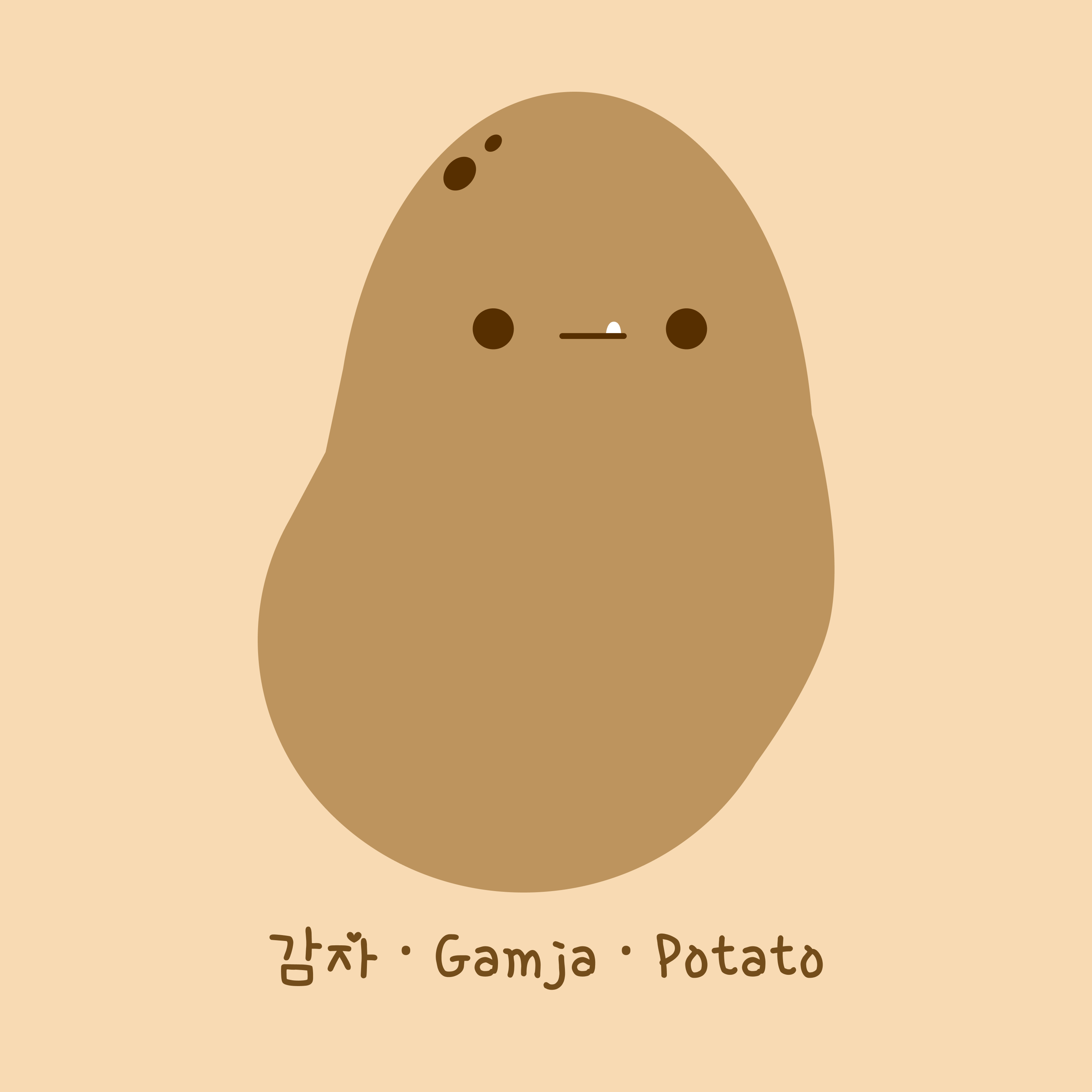 I remember when I had created this particular potato character, I sort of rushed through the design. Being a potato, I knew I wanted it to be kind of boring yet add a little cuteness to it. So I gave it a blank stare for the boring part and one tooth that showed it had an underbite for the cuteness factor and that was it. Its form was asymmetrical and there wasn’t much going for it…or so I thought.

I posted it onto Instagram and a lot of people liked it. Like 900+ people liked it. I share this not to boast about the number, but to share that it absolutely caught me off guard. To this day I have not a clue as to why the potato resonated with so many folks to get that many likes ¯\_(ツ)_/¯. But when it did start to gain popularity, it motivated me to create 9 more food characters for a total of 25.

I honestly didn’t expect my illustrations to be that popular but in a matter of a few weeks, I went from having about 50 followers to almost 500 followers.

After a few weeks I ran out of illustrations and then I stopped posting to Instagram.

Coping with doodling and coloring

In March of this year, the global pandemic from COVID-19 hit. As a way to help with coping, author and illustrator, Mo Willems started a daily session of videos for kids, called Lunch Doodles with Mo Willems.

A few days, after eating lunch with my kids, we’d take what we learned from a session with Mo Willems and spent time doodling and coloring. I found the time really nice because I got lost in having fun and not worrying about work or the worries of the pandemic.

It was these moments I spent with my kids doodling, that gave my wife a little break to relax and drink her coffee.

From the fun I had with my kids, I thought it’d be neat to take a few of my food illustrations and turn them into coloring sheets for my kids to draw and hopefully learn a little bit of Korean.

So I turned the potato and the corn into coloring sheets for my kids and it was a hit! They loved taking the simple food characters and making it their own. I loved watching their creativity as they added limbs, hair and outfits to each of the characters. 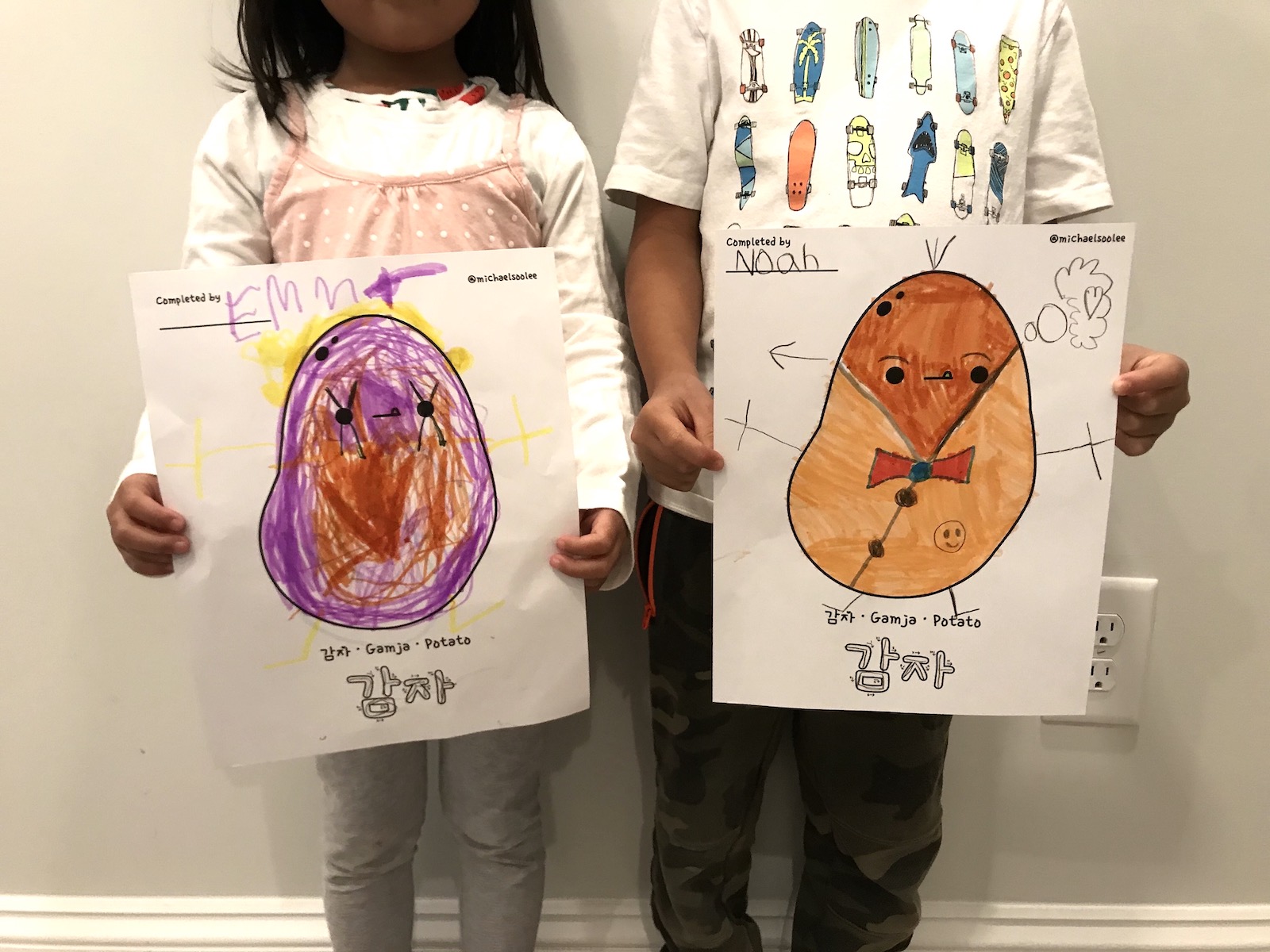 I also found it almost therpeutic in that I could sit there and just unwind a little by spending time coloring.

Seeing how beneficial it was to my entire family, I decided to turn all my food characters and five new characters to create a 30-page coloring book. While the illustrations are fun and whimsical which makes it super approachable for kids, I had a broader audience in mind when I created it. 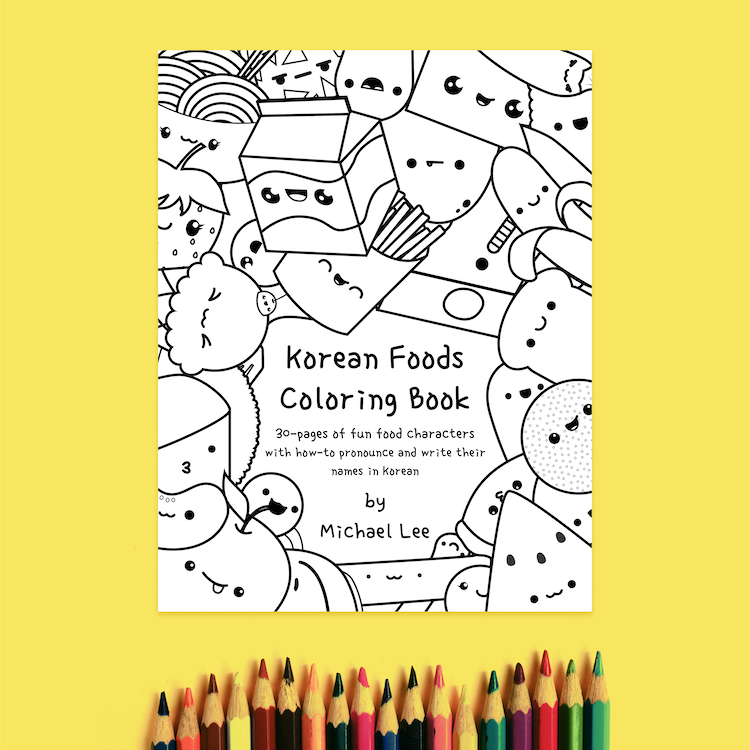 The original idea was to create a set of flash cards to teach my kids Korean with the food illustrations, but I’m really happy with how the idea transformed into a coloring book.

I think the coloring book achieves the goal of the original flash cards idea and more. It teaches Korean and how to write Hangul, but it’s also fun and therapeutic for all ages. This coloring book is also an example of something I wish existed when I was growing up. A product that was made to embrace cultures, created by someone living at the intersection of different cultures.