My son and I enjoy playing chess together. He’s 7-years old and has surprised me quite a few times with the strategies he has pulled off in our games.

In our most recent game, he had managed to corner my king into the corner of a board.

The king by itself isn’t that powerful. It doesn’t have any neat moves like the rook or bishop. The queen is definitely the cooler of the chess pieces; as it can move in all directions until it meets a friend or foe. While the king can only move a single space in all directions.

The piece that he was using to pursue my king was his queen. He kept pressuring me to move my king closer and closer to the corner of a board as with every move it was met with “check”—a sign that if I made a mistake in my next move, the game will be over for me. 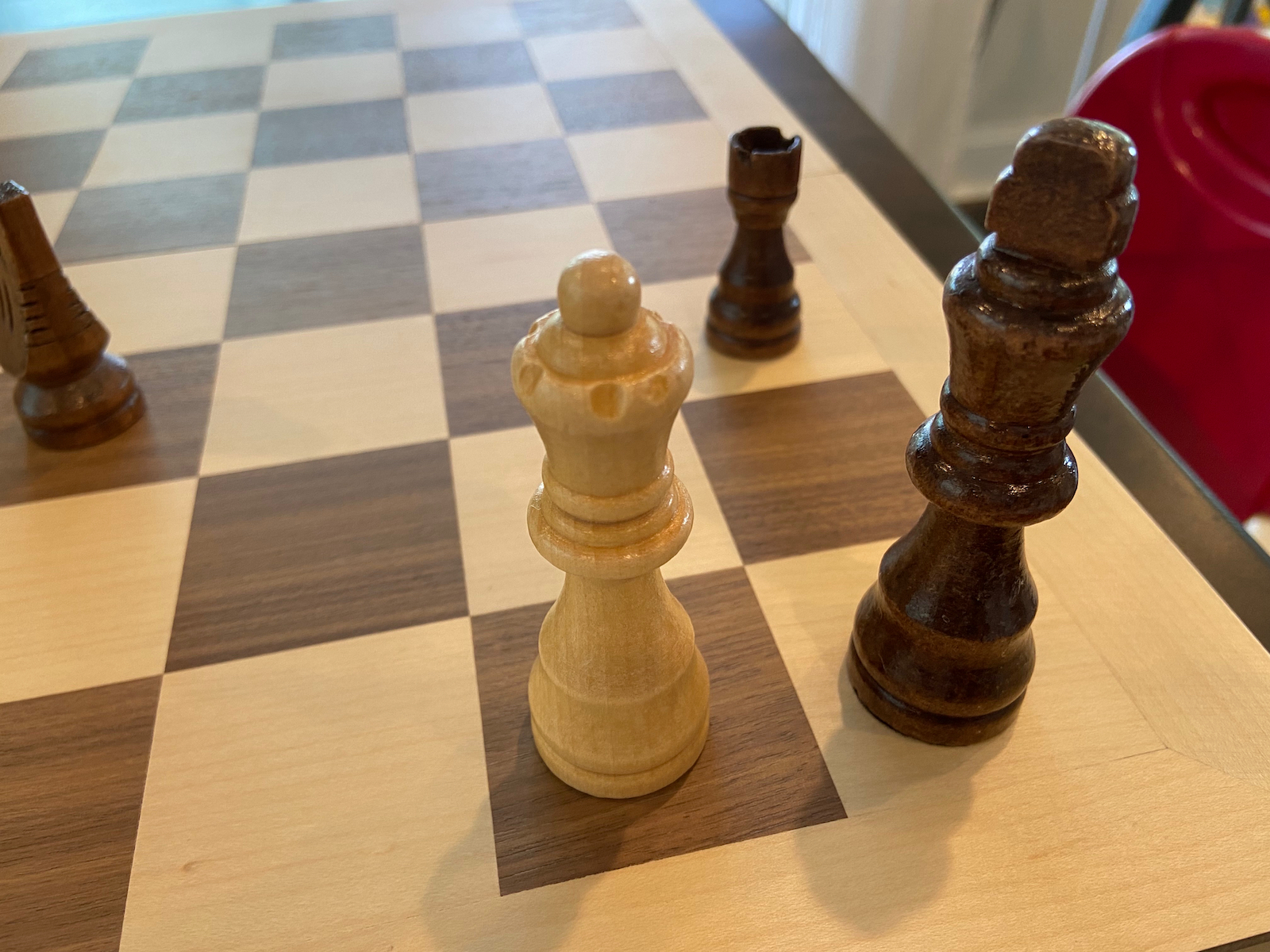 Eventually his queen and my king were side-by-side with me in the extreme corner of the board. Frantically realizing that I had nowhere else to run with my king, I was about to call it a game and congratulate him on a job well done.

But my son stopped me and pointed out that there was still one move that I could make and that we could keep playing our game. He reminded me that it was my turn and that as the king, I can overtake his queen because the piece was in an adjacent spot.

At that point it had dawned on me that I had forgotten my abilities as the king. I was so fixated on the problem at hand—the active pursuit—and my need to runaway to survive. I, in my mind had kept telling myself how weak of a piece the king is. But my son reminding me that I can overtake his queen piece was a reminder that although the queen is definitely a very cool and powerful chess piece, the king was capable of overtaking the piece.

This wasn’t just a lesson in a game of chess, but it was definitely a life lesson for me. There are many identities that I carry that make up who I am. One of husband, father and colleague to my coworkers.

And at times I fixate on the pressures and problems of life and career that I forget who I actually am and what I am capable of. It is easy in the thick of a situation to allow the dialogues of inadequacies or imposter syndrome to drown out your identity.

But it is in those moments when my family and my peers remind me of who I am and what I am capable of that I can snap back into saying, “I can handle this”. That the challenges I’m facing at this moment, I have all that I need to face them.

And those reminders don’t have to be profound.

They can be as simple as being called “daddy” from my children or a colleague asking for my opinion because I was hired for my expertise.

Perhaps if you’re reading this, you might be in a different life stage or circumstance than me. And the type of people I’ve described that remind me of who I am don’t exist in your life.

You can still be reminded of who you are—by yourself. If you’re in a place where you feel inadequate about who you are or what you’re able to do. One-by-one list out the things you’re faced with.

Once you’ve listed them out, take a moment to go through each point. At each point, pause and flip the script. For example, if you don’t feel adequate as a leader, tell yourself that you are a leader. And try to think about a time where you really showed leadership and others also acknowledged you for leadership.

Or one I struggle with often is being organized. I often find myself feeling unorganized and disoriented. But then I pause and tell myself I am organized. And in that moment, even if it is a small example, remind myself of a time when I felt organized.

You might be surprised what comes out of this when you’ve flipped the script on some of the things you believe you aren’t capable of doing.

Once my son reminded me that I could take over his chess piece—his queen, I thanked him and proceeded to do so.

He then toyed with me for a few more moves before he had me at checkmate.

Although I lost the game, he reminded me of how capable the king was.