A few weeks ago my partner, Christopher and I decided to sell our business, Print Squares – for a dollar.

I thought I’d share why we did it, what we learned along the way and what’s coming up next.

Why We Sold Print Squares

We sold Print Squares because we were interested in other projects and didn’t have time to nurture and care for it. We didn’t want Print Squares to become another internet business that faded into the endless abyss of dead businesses, we wanted to put it into the hands of someone capable of breathing new life into it.

Seriously, You Sold It For A Dollar?

Yup we sold the business for $1, 100 pennies, a Washington (Is that a thing?!). We decided to sell Print Squares for a dollar for a few reasons.

The first reason was, the amount didn’t matter, what we valued was the lessons we’d learn in selling the business.

Second, we wanted to make sure the ability to sell the business wasn’t just isolated to a certain group of people, but open to everyone. Although Chrisopher and I designed and programmed everything, the new owner didn’t have to be technically savvy at all to run the day-to-day operations. Likewise, as long as someone was able to really show their vision and excitement for Print Squares, that was enough for us.

Last, it was a marketing exercise. At Herelde, we’re always experimenting and trying new things. We wanted to see how viral we could make the announcement of the sales. With mediums like Twitter and Hacker News, you need to have a title that is grabbing. We thought selling a business for a dollar had enough shockvalue to draw attention.

Here’s What We Learned

There was a lot of things that we learned, so I thought I’d just list them out as more of a brain dump.

In the past when we’ve made announcements about our products and services, we would constantly blast out tweets and facebook updates to our personal accounts. Probably annoying the heck out of our friends. This time around we wanted to be tactful.

I was skeptical at first, because I thought maybe they wouldn’t see any value in us selling our business. Or shrug it off because they thought the idea was silly.

To my surprise, every person that I asked, shared my message with their audience. It was an awesome feeling and here’s a quick shoutout to some of the people who shared about the sales – Gregory Ng, Scott Moody, Barrett Brooks and Joel Pagan.

Use numbers in Your Title for Hacker News

When I first posted the link to our site at ownabusinessforadollar.com I titled the post, Own A Business For A Dollar. This was a mistake. I quickly saw my post move down and down on the page with no real visitors on the site.

Looking over the front page of Hacker News, I realized a lot of the titles actually used numbers instead of spelling out the number. So I quickly changed the title to Own A Business For $1. Thankfully I changed it before my post moved down and eventually got paginated to the next page.

Once the title change was made, we were able to see visitors from all over the world pop up on our live Google Analytics page. Shortly after, inquiries also began to trickle in.

Although everyone covets the number one spot on Hacker News or even to have their post show up on the front page, being on the first page of the New section can still send a lot of traffic your way as long as you have a catchy post title.

Due diligence goes both ways

We thoroughly enjoyed exchanging emails and reading about people’s stories. If you were one of the people who inquired about Print Squares, thank you for sharing your story with us.

Many will start, but few will launch

A reoccurring theme I saw come up over and over again throughout a few different emails, was that people will start their journey into building or starting a business, but few will launch. Being tech-savvy was not a requirement for the next owner of Print Squares.

But I realized a lot of people get caught up with the tech or the learning of a programming language that could help realize their business ideas. So much so that their ideas never see the light of day. Or never gets launched.

This is unfortunate because that means the world will never get to enjoy what they have to offer.

Stay true to your goals

I can’t stress enough the amount of positive feedback we got and things that people were able to point out that we simply didn’t see.

A few things others pointed out:

A lot of great feedback and suggestions, and I won’t lie, there were times where I wanted to back out and keep holding on to my baby, Print Squares.

But the truth was this, we didn’t have the time or energy to continue with Print Squares or take it to the place where we had dreamed it could go. We decided to sell it and give it a chance to grow with some new energy.

We had already entered into conversations with people that were expecting to purchase our business for $1. We weren’t going to change our minds. That wouldn’t have been cool.

Honestly, we hope the new owners of Print Squares will find huge success. I’m even looking forward to using the services and purchasing any future products they come up with.

Going the extra mile pays off

Persistence pays off. Many people inquired, but few actually engaged with us. The person we ended up choosing to take over Print Squares, not only emailed us promptly and asked many questions. But he also engaged with us where we hung out. He followed us on Twitter, favorited our tweets and even retweeted our tweets about selling the business.

In the end his efforts for going beyond what others did paid off and showed that he actually cared and was very interested in taking over the business.

What’s Next for Print Squares?

I want to go ahead and introduce the new owners of Print Squares. Their names are Casie and Michael Hoy.

Michael is the guy (with cool hair) shaking my hand and handing me the dollar in the photo below. Casie isn’t pictured because she’s taking the photo of us. This awesome couple are the ones who will be taking Print Squares to the next level and breathing new life into the business. 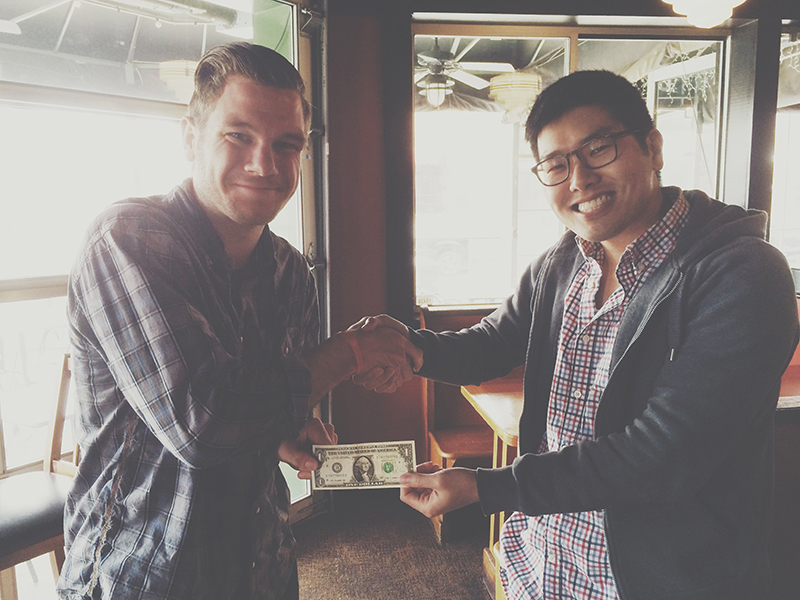 At the time of the sales announcement, the Hoys were mulling over some business ventures that they could pursue together as a couple and jumped on the opportunity. I thought this was awesome because, Print Squares has very much been a family affair for me as well. My wife, Sue has helped shape a lot of what Print Squares is today.

Michael is a super connected guy in the local music/art scene and Casie is an awesome mother with Instagram on her mind.

For now, Print Squares will continue to run as usual. Orders can be placed and orders will ship in the same manner it’s always have. As Casie and Michael find their bearings, some exciting things are instore.

First, Christopher will be framing the dollar we’ve made from selling Print Squares and hanging it over his desk.

As for Herelde, we are incubating some projects but aren’t ready for prime time yet.